DIRECTOR OF THE SCHOOL OF THE WISDOM: NEW APPOINTMENT 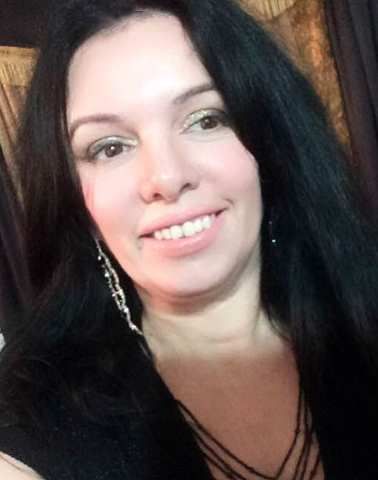 The Theosophical Society Adyar are delighted to announce the appointment of Erica Georgiades as the Director of the School of the Wisdom. Erica, who is well known to many members of the Scottish Region having visited here as a guest speaker in 2014, has been member of the Theosophical Society Adyar since 1991, and from 1994-1996 lived at the International Headquarters, working in the Adyar Archives (now Surendra Narayan Archives). She has served as Director of the European School of Theosophy since 2018; Secretary of the International Theosophical History Conference, and is a recipient of numerous academic degrees in the fields of Religion, Psychology, and Philosophy. She lives in Athens, Greece with her husband and daughter.

Congratulations are due to Erica whom we very much look forward to seeing in October 2022 in her capacity as  Director of the European School of Theosophy which is to be held at Newbattle Abbey.

The Theosophical Society in Scotland and the Glasgow and Dundee Lodges would like to express their deep gratitude and appreciation to members, for their charitable donations to support the education of children in Nepal.

On the night of the Winter Solstice, 21st Dec 2020, Fotoula Adrimi, long-term member and secretary of the Glasgow lodge, facilitated a beautiful shamanic ceremony online, in celebration of the winter solstice. The ceremony was organised by the Glasgow Lodge but many members throughout Scotland attended. Participants donated to a fund that pays for orphan children and those unable to afford the fees, to attend school, including school uniforms, books and shoes for these kids, as without these they cannot attend school. Last year 14 children were supported. The Glasgow Lodge has been supporting this initiative since 2015, mainly from its own funds, following the earthquake in Nepal, when the school buildings themselves were damaged and many families were severely affected.

All donations are transferred directly to the Shree Saraswotih.s. School. There are no intermediary organisations, and all the money is spent on poor and orphan children. We are incredibly grateful for everyone’s kindness, love, and generosity. The total amount received was £1,580.00 which is wonderful. The School, the children, the Glasgow Lodge consider this to be a miracle.

Thank you to everyone for your heartfelt support.

With gratitude and love.

TO ENLARGE THE IMAGES BELOW PLEASE CLICK ON THESE

Class of pupils receiving teaching under the tree 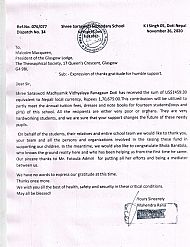 School letter of thanks to Glasgow Lodge